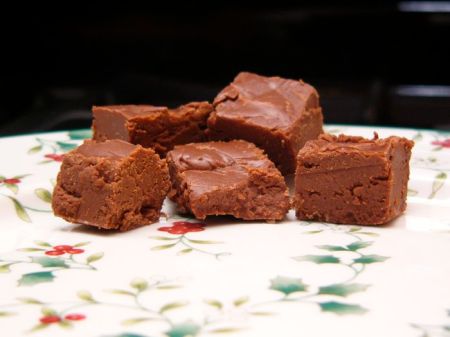 There are – in my estimation – two types of fudge; the easy type (which involves the use of marshmallows) and the not so easy type (which involves beating the fudge until it sets up). Now don’t get me wrong – for the first 21 years of my life I’d really only ever had the “easy” type of fudge, and I enjoyed it. Sure, my parents ruined it by putting nuts in it, but I still had some every Christmas. I don’t mind nuts in fudge so much now, but at the time they were really, really wrong.

And then I met my wife, and she introduced me to her Grandfather’s fudge…and it was like a revelation. Well before we were married – before we were even dating – I helped her typeset a paper that she wrote based on her Grandfather’s family recipe. To be honest, it wasn’t so much a recipe as a folk tale. The steps were imprecise, and directions vague…but the results were heavenly. If you could get the recipe to work.

I spent the next 12 years of my life chasing this fudge recipe, trying to get it right every year…and more often than not, I failed. Finally I gave up, but a couple of years ago I decided to see what the internets might offer in terms of a fudge recipe that I could work with. And of course, who should have the answer but…Alton Brown. That’s right, probably my single most revered culinary TV hero had his very own fudge recipe, and more miraculous: the ingredients – with one exception – were exactly like my recipe.

Alton’s recipe and the one I inherited from my wife’s Grandfather differ in two important respects:

So rather than re-print Alton’s recipe here, I’m linking to it on the Food Network website: http://www.foodnetwork.com/recipes/alton-brown/chocolate-fudge-recipe/index.html. Give it a try, and I think you’ll agree – it’s absolutely fantastic, and I have never – not once – had a batch of this fudge fail.

My recommendation for this recipe is to use top-quality ingredients, especially the chocolate. For the past few years I’ve been using the Ghirardelli 100% cacao unsweetened baking bars, and they turn out wonderfully. The best chocolate you can afford will really make this recipe something to remember.